Soccer is one of the most popular sports around the world, and although it can be played in many different settings and with a few variations, it has some pretty basic rules that are always followed when it is played properly.

Just like many other sports, soccer does indeed have a halftime. This halftime lasts for 15 minutes, and it serves as a break that divides the game into two 45 minute halves. 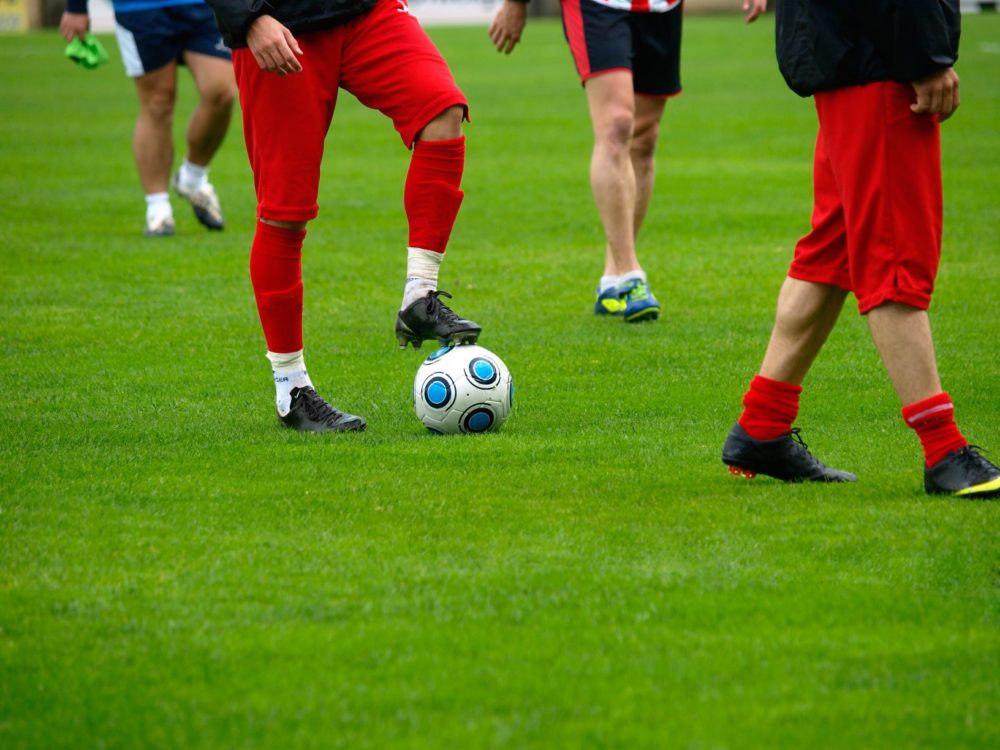 But what happens if the soccer game is extended and extra time is added? Does that affect the half time? And why exactly does soccer need a halftime? A break is always nice for the players to rest and catch their breaths, but is that all the halftime is?

We can answer all these questions and more, so fear not, you will be a soccer halftime expert by the time you’ve finished reading through all we have to say!

Why is there halftime in soccer?

Let’s start by explaining why there is even a halftime in soccer games to begin with. Do they have a significant purpose? The obvious response is that there is a halftime to break up the soccer game half way through, allowing the players to catch their breaths and regroup.

After all, soccer players do a lot of running throughout a soccer game, some more than others, and a full 90 minutes without the break might be a little too intense. Those 15 minutes can be heaven sent to drink some water and rest up.

However, the halftime does a lot more than simply providing a short rest.

The halftime is also an important marker, a clear indication that the game is halfway through. The referee gets a chance to alter anything if needed, commentators get to predict and comment on how the game will continue and end, players get to talk with their coach to redesign their strategy if needed...Plus a few technical things take place at halftime, which we will explain in a bit.

Basically, a halftime serves a lot of different purposes, and it provides the players, the referee, and the audience with many benefits! (We will look at what happens during halftime later on to look into these benefits further.)

But first, let’s take a look at the specifics of how halftime works in soccer.

How halftime works in soccer:

Other sports choose to divide the game up into quarters, instead of halves. But soccer has that one halftime break in the middle, and that’s it. Therefore, a soccer game follows the following structure:

If needed, a referee can also add extra time on to a soccer game. This usually happens when they’ve ended in a tie and need a clear winner. This added time is like a second shorter time played on top of the regular match, with two 15 minute halves, and a penalty shoot-out.

Just like everything else during the soccer game, the halftime is regulated by the referee. The referee indicates the beginning of the halftime, and the end. The referee is also the only person that can alter the duration of a halftime, although it is very uncommon for it to be altered in any way.

After a halftime, the teams will also switch sides on the field. So this is a technical change that is provided through halftime as an indication of being halfway through the match. The reason for this is to make the game fair.

After all, a certain side of the field might have an advantage or disadvantage due to weather conditions or other factors, such as wind blowing in a certain direction, or the angle of the sun. Switching sides also switches the advantage and disadvantage, so that both teams have shared in the same circumstances.

Halftime is also a great opportunity for switching out some players for others, in a way that doesn’t interrupt the game as much. It’s quite common to see players switch during halftime, as well as seeing the team adopt variations to their game strategy depending on how the first half has played out for them. Halftime is essentially a chance to recalibrate the team and players, so that they can continue to play at their best despite having already endured 45 minutes.

What about halftime during the extended time game? It is also structured into two halves, so does that mean they get a break?

In a way. The extra game time consists of two 15 minute halves, which is a lot shorter than the 45 minute halves of a regular game. There is a halftime break, but it is a maximum of one minute, so it doesn’t really give them a lot of time. If anything, it’s a tiny pause to grab a quick sip of water or talk to the nearest player.

History of halftime in soccer:

Soccer hasn’t always been played in the same way. Like most sports, it has evolved and changed with the course of time, until it has become what we know it as now. So, has halftime always been an element of a soccer game? Has it always existed?

In a way, yes. Halftime is a pretty basic element, common to many sports, so it comes as no surprise that it is one of the oldest parts of the rules of soccer. But did it always have the same purpose?

As for providing the players with a short rest, this has always been the same. It’s a logical game mechanic that works for long games such as soccer, allowing for a pause and a re-set.

However, historically, soccer also used halftime for something else.

Back before the rules of a soccer game were properly established and regulated, the game presented many variations, and people from different places or ages would have played soccer in slightly different ways. This means that when they came together for a joint game, they had discrepancies in how to play it.

This is where the halftime came in handy. They would play by the rules of one of the teams for the first half, and then change to the rules of the other time in the second half! That way, it was fair and equal for both teams.

This no longer happens nowadays, as the rules are pretty established worldwide. However, the sentiment remains, as teams switch sides on the field to ensure the circumstances are equal and just!

What happens during halftime in soccer?

Now that you know what a halftime is in soccer, as well as knowing why it takes place and the technical changes that it causes within the game mechanics.

But you might also be wondering what other things happen during halftime, along with the benefits that it offers to the referee, players, and audience. Let’s take a look!

The referee is one of the most important people in a game of soccer, as he’s in charge of all the rules, and is the maximum authority in regards to the players and the game as a whole.

As he has to keep a close eye on where the ball is and what’s happening, the referee has to be able to keep up with the players and does just as much running!

It can be hard for a referee to process the entire game play as it’s happening, so the halftime is also a great short break in that regard. It’s also a great moment for the referee to evaluate and put any alterations in place if needed.

Usually, soccer teams will have learned various strategies and game plays, and they will be instructed to sue certain planned maneuvers throughout the game, depending on what other team they’re playing against. It’s the coach’s team to instruct and train them so that they have the very best chance of winning.

However, maintaining a single strategy throughout the entire game is pretty much impossible, because the other team will catch on and adapt against it. Halftime is a great opportunity to recalibrate the strategy, process how they’ve played during the first half, and come up with a plan for the second half.

The coach will have been watching closely from the sideline, probably shouting out instructions from time to time, so he will have seen everything from the outside. Players are focused on what they’re doing in the moment, so they can struggle to see the whole picture.

During halftime, it is very common for the coach to take the entire team aside and have a quick chat about how they are going to proceed during the second half, and it can be the difference between losing or winning.

As we’ve already mentioned, halftime is a good moment for switching out certain players for others, and to make changes within the team, (as long as they are approved by the referee). However, it is also a good opportunity to check up on any injuries that the players will have suffered.

If a player gets badly hurt during the game, they will usually be removed and attended to immediately. With smaller injuries, on the other hand, players will tend to hold on to keep playing until at least halftime or the end of the game.

During the break, they can analyze how bad the injury is and whether it will compromise the game if they keep playing, and whether they should just switch out for a different player.

45 minutes of intense soccer playing usually leads to being thirsty, so halftime is the chance that players get to hydrating themselves and eating a quick snack to get their energy levels back up.

Usually, players will drink energy drinks with added sugar, so that they’re getting hydrated while regaining energy at the same time!

(It’s also an opportunity for the audience to go grab a snack and drink too! After all, watching the game can be just as intense, if only on an emotional level!)

Commentators are incredibly skilled at reporting soccer games live. However, it is during halftime when they get to sit back and discuss the game a bit more in depth.

They will usually go over the highlights of the first half, with more time to analyze them. And they will also speculate about the second half and the outcome of the whole game.

Sometimes they will host interviews or get other professional opinions in! The audience can also use this time to rest from the intense emotions.

A quick trip to the restroom, a quick phone call, the gathering of more snacks...Or just a chance to squeal in excitement with your friends for a bit!

Last, we just had to include the most obvious thing that takes place during a halftime: the players get a short rest.

After 45 minutes of running and playing at their best, they deserve to sit down and catch their breaths for a moment! That way, they can keep playing just as well during the second half of the game!

Does soccer have a halftime? Yes, it has a 15 minute halftime to divide the two 45 minute halves of the game. In added time, which happens when the game has ended in a tie and they need a winner, two additional 15 minutes halves are played, with a one minute halftime as a symbolic break.

The halftime serves many purposes, such as switching the side of the field that teams are playing on, and recalibrating the team strategy or switching out certain players. It also offers a short rest and a moment to gather one’s thoughts, for the referee, the coach and players, the commentators, and even the audience!